The Church of Divine Mercy (CDM) Penang held its 5th Parish Pastoral Assembly on November 18. The proceedings were held inside the church after the 9 am Sunday Mass. A wide cross section of the parish was present, aged from 93 years to just a few months old. The meeting began with everyone singing Kent Henry’s worship song, Spirit Touch Your Church. This was followed by an opening prayer. 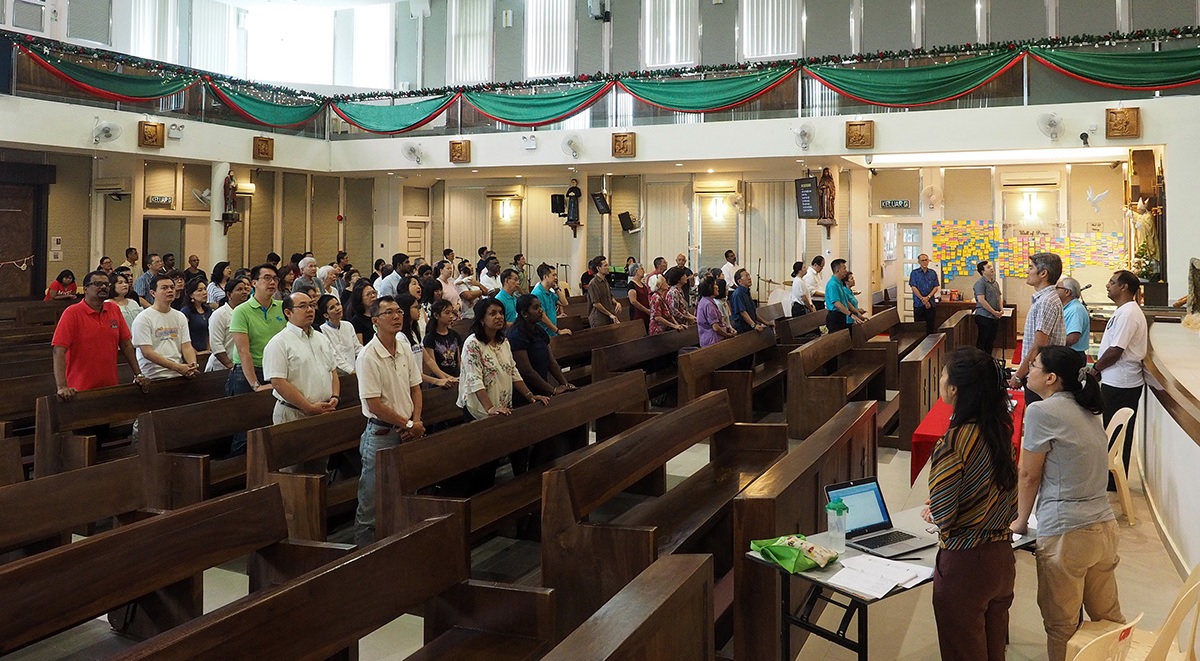 In his welcoming address, Parish Pastoral Council chairman, Rodney Gomez, recounted that in the course of the parish’s growth over the past five years, they had been constantly challenged to do better each year. He said that as they continued to grow, they needed to remember that “the harvest is plentiful but the labourers are few” (Luke 10:2) and take the opportunity to invite family and friends to join in the harvest. He added that the best way to do this was through the word of their personal witness. He continued to say that when faced with difficult situations, it helped to reflect upon two questions, namely, “What can we do for others?”  and “What would Jesus have done?”. He then proceeded to present the financial report which included a brief update on the parish’s solar power revenue generation project and its performance so far.

Next on the agenda was a review of feedback given by parishioners. This feedback had been collected over a one-month period. The parishioners had been asked to answer four questions which had been specially formulated to gauge what CDM parishioners expected of CDM and to elicit suggestions on how they could participate more actively in the parish. The answers received included requests for Masses in Tamil and Mandarin, more spiritual formations, a baby corner and more motorcycle parking space. There were also suggestions on how to implement more environment-friendly practices in church and how to encourage greater participation from migrants coming to CDM.

In the report on fund-raising and parish performance, the assembly was updated on the status of the proposed new building housing the Community Hall and Free Learning Centre. The results of the various events held during the year were explained. These included the #JomENJOY Food & Fun Fair and various coffee mornings after Sunday mass. The report illustrated how a schedule of planned giving and donations could generate adequate funds for the new building within five years. The success of this venture depended largely on the participation and resolve of the parishioners. Updates were also given on the status of other planned church activities, such as formations, pilgrimages and the family visits conducted by the parish priest, Fr Martin Arlando.

In his address, Fr Martin revealed that it had become increasingly difficult to manage a fast-growing parish like CDM. However, he had noted a great sense of unity which pervaded the whole parish and he could not help but feel proud each time he saw his parishioners determinedly coming together as one church to meet a new challenge. He said that this sense of unity and shared purpose was so strong that it had been obvious even to the delegates and VIPs who attended the recently-concluded 4th Asian Apostolic Congress on Mercy (AACOM) which CDM hosted. He explained that this unity was a sign of how much the parish had grown since setting out on their three-year liturgical plan, which began in 2017 with the parish focus on Prayer and continued in 2018 with the focus on the Word of God. Now, two years down the road, they were ready as a parish to step confidently into 2019, the year of the Family.

Fr Martin went on to outline his plans for the parish in the coming year, which included activities for the Extraordinary Missionary Month, spiritual formations focusing on the family and on the care for the environment, an in-house BEC reflection paper more suited to CDM, and a Ministry of the Sick. He gladly shared the news that CDM had just been granted a relic of Blessed Fr Michael Sopoćko, the confessor and spiritual director to St Faustina. He also announced that the parish was looking into the possibility of building a columbarium. A murmur of approval rose up from the assembly upon hearing this.

The last item on the agenda was a Q & A session during which Fr Martin answered additional queries regarding the affairs of the parish. The questions covered included the need for an assistant parish priest and the feasibility of uploading Fr’s Sunday homilies to the parish website.

The assembly ended with a prayer led by Fr Martin, after which everyone joined in to sing the hymn, Family of Faith. Although the attendance at this year’s assembly showed a slight drop in numbers, there was a general sense among those who came that CDM was growing and achieving its mission of becoming an inclusive community to all those who entered through its doors.

Update Personal Details
Your ticket for